Jörg Imberger
Introduction: Physical Limnology: The Queen and The Servant

Solutions to any problem, in general, require 3 steps. First, stakeholders must realize that their domain has a problem, this was the theme of the first talk. Second, solution techniques must be found or developed that allow a relevant solution to the problem at hand (second talk). Third, the solution technology needs to be tailored and then applied to the problem that has been identified, in a way that has the support of the majority of stakeholders in the domain and secondly, ensures that nature remains sustainable (Third Talk). These three steps have, however, have become more difficult to implement in the age of social media where the truth is define by influential social media advocates, making step 1 very difficult if the solutions involves a conflict of interest with one of the stakeholders. Further, what is required as a solution that ensures environmental sustainability, has also changed dramatically over the last 20 or so years, for the simple reason that modern communication technologies encourage people to think that they know as much as the experts, so any solution must cater for stakeholders changing views. These changes in human lifestyles have motivate the development of the technologies described in the following three talks.

Part 1: Averting The Extinction Of Freshwater Aquatic Fauna and Flora 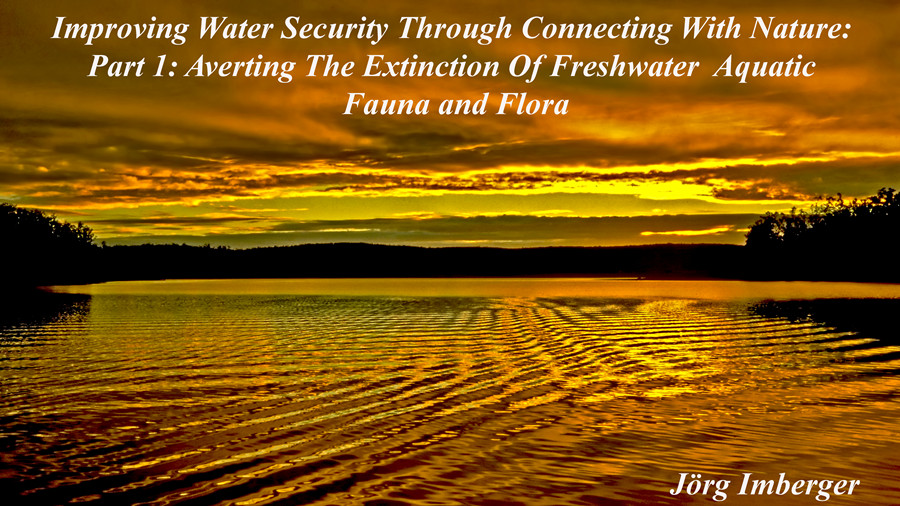 Target audience: General public and politicians
Delivery: December 14, 2020, at a webinar under the IAHR 85th Anniversary Summit
Presentation slides | Video of this talk | Playback of this webinar | Program and introduction of this webinar

Abstract: The aquatic environment in a lake is the home for the ecology in the lake and the existence of a close connection between the hydrodynamics, together with ethe trophic level and the species that are found in the lake has long been assumed. What is perhaps less well understood is that many species modify the hydrodynamic environment to suite their own life style, giving them an evolutionary advantage, just as humans build shelters and grow food on farms and transport the food back to their homes. The two length scales of the water motion in the lake, that have the greatest influence over species selection and growth rate, given a certain trophic level and mean water temperature, are the smallest length scales that are determined by the rate of turbulent dissipation that determine the home conditions for the pathogens, bacteria, phytoplankton and zooplankton, the foundation of the food chain. At the other end of the motion length scale spectra are the basin scales circulations that distributes the nutrients that enter the lake via the rivers, the surface runoff and groundwater seeps, throughout the lake. The fauna and flora in a particular lake have evolved as those that can thrive and maybe even modify these two length scales to their advantage. Over the last 50 years the water column stability has been increased in most deep lakes by global warming and increased algal growth rendering the water more turbid, thus causing the incoming solar radiation to absorbed closer the water surface. The changes in the water column stability ,in turn, change the above two length scales. The survival of the present species in the lake depends on their ability to accommodate these changes.  Africa has some of the world's largest, deepest and most beautiful lakes. Lake Victoria is the second largest by area in the world and Lake Tanganyika is world's second largest freshwater lake by volume and depth. Both these lakes are shared by a number of different countries making them extremely important in terms of political harmony. Pollution from one country can easily be convected to the neighbouring country’s shoreline and in extreme cases can change the whole ecology of the Lake by altering the two above length scales. This can very quickly start a blame game and then even lead to conflict in some instances. In the next 20 years or so the aquatic ecology in all deep lakes around the world will be under threat due to global warming and nutrient loadings increasing water column stability, preventing overturns occurring on a regular basis an example of an extreme change of the above two length scales. Given that many of the lakes in Africa have multi country boundaries, the larger lakes in Africa could quite easily become a major foci for national conflict. This also provides an opportunity for IAHR, an international science and engineering associations with a good functioning, international network of water researchers and practitioners to assist in resolving transboundary issues before they become a source of stress.

I shall start by describing, in lay terms, the various dynamical regimes in a lake such as Lake Victoria and the strength of the horizontal connection. Then I shall show how adaptive real-time, self-learning, management strategies can be used to avoid blame games from taking hold, saving counties from getting angry with each other. In the final few views will give an overview of the global extent of the problem.

Part 2: A New Management Technologies for Saving Lakes from the Impact of Nutrient Enrichment and Global Warming 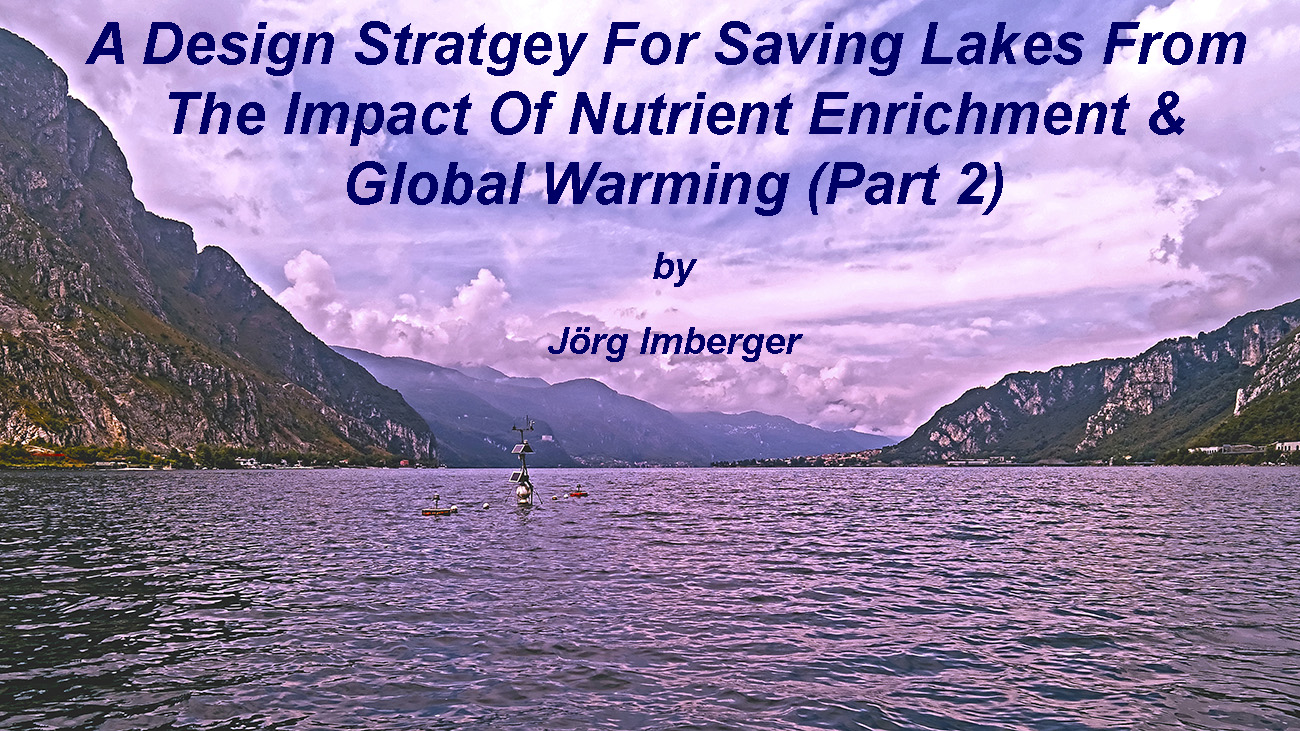 Abstract: Considerable advances have been made in the understanding of most of the hydrodynamic processes in a lake and it will shortly be possible to manipulate the thermal stratification in a lake,  with the objective of avoiding undesirable water quality episodes such a toxic algal blooms and or hypolimnetic anoxia. I shall present a review of the important physical processes and the non-dimensional numbers that govern each of these processes; surface layers, inflows, outflows, differential mixing, differential heating and cooling, differential absorption, benthic boundary fluxes, shear instabilities and internal mixing.

The combined effects of increased nutrient loadings and increases in long wave surface radiation due to global warming is increasing the stability of deep lakes around the world, resulting in a delay in lake turnover. By way of example, Lake Iseo, Italy, used to turnover annually now has not turned over for last 20 years.  The result of this lack of mixing of the deep water with the surface water is an ever increasing volume of the zero oxygen hypolimnion. The low oxygen concentrations in the hypolimnion is triggering a positive feedback mechanism that is further stabilising the water column. The net effect is that deep lakes in middle latitudes, such as Lake Iseo, have not turned over for nearly 20 years and now have a water column that has zero oxygen in 80% to 90 % of the lake volume. Should a severe mixing event happen that will rapidly turn over the water column then all the biodiversity, in the lake, will be asphyxiated.  Given that most of the biodiversity in deep lakes is endemic the implications of this are enormous for the world. After, very briefly reiterating the processes leading to this problem, I will show how the new adaptive, real-time, self-learning, management approach may be used avoid this disaster from happening. Currently, the only thing that is preventing this solution from being implemented in order to solve this important problem facing world, is that death is happening underneath the water surface and it's difficult to get anybody to take an interest. The adaptive management approach can also address this issue, simply by giving people the opportunity to see implications of their actions.

Once stakeholders see there' s a problem a solution becomes possible. Quite a long time ago I did a simple back of the envelope calculation which showed that the potential energy in the stratification of, even a very large lake, is relatively small, comparable to what could be introduced by solar powered impellers, mixing the water column. Hence by setting up the lake in virtual reality including the action of the impellers it is possible to arrive an optimum solution maintaining the health of the quality ecology. 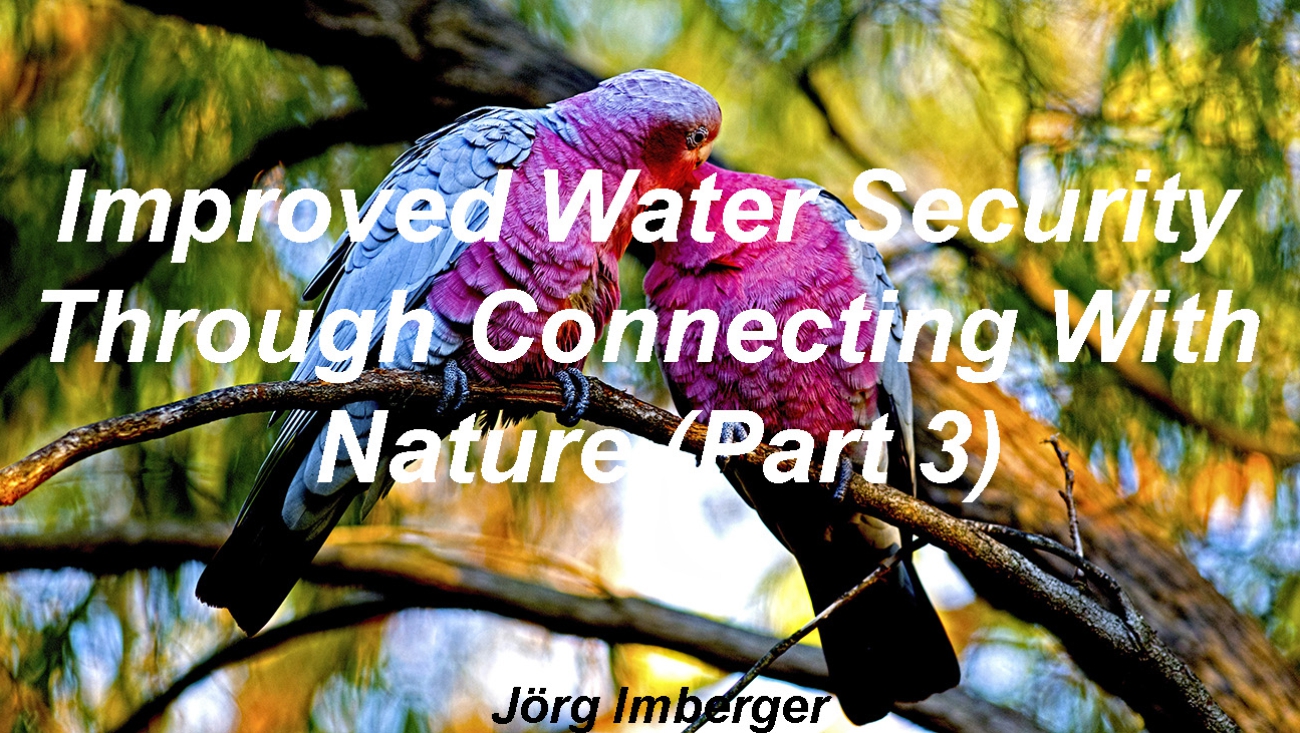 The changes the way humans  communicate means that static plans that have a 1 to 10 years tenure are no longer relevant. What is needed is a management strategy that allows stakeholders and the environment  to change  their needs on almost a daily basis. This means that the stakeholders need to be educated about what nature does for humanity. In other words all people living in a catchment should be connected to nature in the catchment in the indigenous sense. This can no longer be done by the family spending time in the bush, we need to use a virtual reality engines of the environment and our actions on the environment  with complete access by all stakeholders via a smart phone to make the connection. The focus of this third talk is to illustrate how the new apps described in Talk 2 may be applied in practice. The artificial intelligence algorithm which allows all stakeholders from kindergarten to senior elders to interrogate the artificial intelligence engine via a smartphone and so learn first hand the impact of our lifestyle  has the environment. The major feature of the new software is that all the models are process based which is necessary because all model predictions need to be independent of the site of application. The models may be set up so that the output is in real-time  and forecast mode. Management can thus use the virtual reality output to optimist a design of new proposed developments and ensure the sustainabiity of nature in the domain. Stakeholders can clearly see the impact of the propose action on nature. I shall use the Swan-Canning Estuary the icon of Perth, the capital of Western Australia to describe the use of the new adaptive management approach. In conclusion, I will illustrate the similarity between the origins of the standing water problems and those we are  encountering with respect to global warming and other major issues facing the world. These problems all have their origin in the way the communication between people has changed from using our eyes, voice, smell, hearing and touch and being “connected  to country” to a unemotional single stream of zeros and ones and all require the new management approach.