Ramón H. Fuentes Aguilar, distinguished hydraulic engineer, professor and researcher, and Honorary Member of IAHR, passed away on 27 January, at the age of 82, in Santiago de Chile.

He returned to Chile in 1993 and became an industrial advisor and consultant in numerical and experimental applications in the metallurgical industry, and a professor in the Department of Mining Engineering at the University of Chile. He developed numerous collaborations as an advisor to public and private companies in various disciplines such as Mining, Transport Concentrate minerals, Dredging, Hydraulic Works, Transient Flows, among others, in Chile, Argentina, Venezuela, Zaire, Costa Rica, the Dominican Republic, Niger, and other countries.

Writing about Ramón's academic and scientific skills would surely take me many, many pages. I can only cite a few picturesque phrases from certain colleagues and friends (for example, José Luis López) who affectionately and respectfully described Ramón as a “living encyclopaedia”. In fact, when faced with any discussion about hydraulics and fluid mechanics topics, he always brought to the table (from his own memory) the most representative bibliographic sources on the issue that had been published to date, with comments such as “…. indeed, there is an article published by ‘A’, in collaboration with ‘B’, in year X while they were working together in place ‘M’. In that article, before the conclusions, there is a graph of the variable Y versus the variable X, in which the cloud of experimental points shows the trend of behaviour, which you are observing…”. When you went to the library and found the article in question, you could see exactly what Ramón had commented. This happened to me many times; in fact, it became customary for me to consult him about the essential literature to address a certain topic, and the list was always accompanied by a set of anecdotes and personal experiences in the "study of real cases", that conferred a very special added value to these bibliographic sources. I also recall multiple occasions when I commented to Ramón that I was having difficulty getting a rare book out of the catalogue, and the next time we were at a congress or meeting, he told me “I have a gift for you. Just wait a minute ...”, and it was an original copy of that book in (or, in the worst case, a neatly bound quality copy).

Regarding Ramón's contributions to the scientific knowledge of multiple topics in fluid mechanics and hydraulics, we could write several volumes. I can only mention that, over five decades, his contributions have been invaluable on very varied topics, reflected in books, articles, presentations at congresses and meetings, conferences, lecture notes, etc. ... but we also know (those of us who worked close to him) that Ramón pioneered many ideas that later appeared in scientific journals many years later. For example, I have recently read many articles on subjects such as particle settling velocity, Shields curve "rationalization", incipient movement of coarse sediments, velocity profiles in macro-rough flows, transition functions to represent multiple boundary layer problems, phases in the temporal evolution of the local scour process, and many more, and I know for a fact that Ramón had already developed those ideas decades ago, in several cases without actually publishing them. Perhaps few people also know that Ramón was also a pioneer in the use of computer resources as an aid for the processing of experimental data and for advanced calculations in hydraulic problems, for which he used an old computer with technology prior to the emergence of the PC on a global scale. For this, his fluent handling of advanced mathematics and numerical analysis was very useful. In his years at the University of Los Andes (ULA), Ramón was dedicated to scientific production and his generation of innovative ideas was inexhaustible, having conducted dozens of theses and countless promotion work for professors at the ULA. 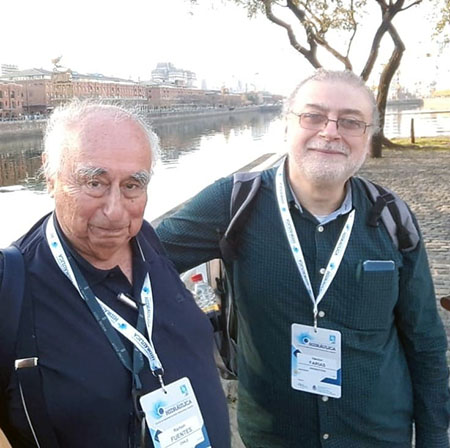 Regarding the particular traits of Ramón's personality, although in some areas the idea of a “difficult character” (perhaps “rough”) has spread, as a result of the image that was revealed by his “incisive” (but passionate) participations  in the technical sessions of the congresses, once you got to know him, you learned that he was actually an extremely warm and gentle person, of great generosity, and with a particular sense of humour, not without irony and "acidity", but always with good intentions. The talks with Ramón were always nuanced (beyond the strict rigour of the information he provided) with very picturesque facts and anecdotes, usually seasoned with extremely attractive and colourful metaphors, which delighted his occasional interlocutors. In the coffee-breaks of the congresses it was common to see circles of numerous colleagues and friends celebrating some humorous or ironic comment…. Almost certainly in the centre of that group was the figure of Ramón.

Ramón's contributions to the IAHR have been immeasurable, through five decades of active participation in all of the Association's activities, from the Latin American Division (LAD) to the highest leadership levels. It can be said that the almost guaranteed success (in terms of attendance and quality of contributions) of the Latin American Hydraulic Congresses is a kind of “registered trademark” and hallmark of the IAHR-LAD. In this sense, the actions of Ramón (as historical Permanent Secretary and later as Honorary Member) have played a preponderant role, through his particular imprint, leaving an indelible mark on those periodic meetings of colleagues and friends of the Water Sciences.

The figure and genius of the beloved Professor Ramón Fuentes will remain indelible in the memory of several generations of hydraulic engineers and researchers who had the opportunity to meet him and enjoy his unique talent and his particular warmth and generosity.