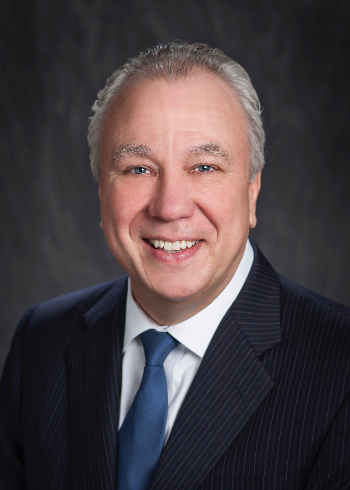 University of Iowa and IIHR – Hydroscience & Engineering alumnus and friend Scott C. Hagen died on 24 July 2021, at the age of 60. Hagen was a tireless advocate for IIHR and its programs; he served as a member of the IIHR Advisory Board from 2014–18.  Hagen was involved in many professional societies, including the International Association for Hydro-Environment Engineering and Research (IAHR), where he was a member for over 20 years.  Hagen was a thoughtful contributor to many IAHR Congresses, symposia and specialty conferences.  In addition to technical exchanges, Hagen and his wife Denise, enjoyed visiting with friends and colleagues from around the world and exploring the local cultures of host countries.  He will be profoundly missed.

An Iowa native, Hagen was born on 7 May 1961, to parents Richard and Lillian (Roemig) Hagen. He grew up on the family farm near Homestead, Iowa. After high school, Hagen spent a year at Iowa State University; he then returned home to farm for 10 years before enrolling at the University of Iowa (UI) to study engineering. Hagen credited his parents and his sister, Patricia Coleman (a civil engineer and a member of the UI Engineering Distinguished Alumni Academy), for encouraging him to continue his studies.

As an undergraduate at Iowa, Hagen worked with mentors such as IIHR Research Engineers Forrest Holly, Jerry Schnoor, and Witold Krajewski. Holly advised Hagen to look beyond Iowa for graduate study, to explore new ideas, new opportunities, and new influences.

After earning a BSE with honors in civil and environmental engineering at Iowa, Hagen followed Holly’s advice and enrolled at Notre Dame as a PhD student, where he worked with Professor Joannes Westerink on hurricane storm surge and tidal modeling.

After earning a PhD, Hagen joined the faculty at the University of Central Florida (UCF), where he served as a professor of civil, environmental, and construction engineering. Hagen built a flourishing program in tidal studies and computational modeling at UCF, where he also led the university’s major research focus on the Coastal Dynamics of Sea Level Rise. Hagen served as director of UCF’s Coastal Hydroscience Analysis, Modeling, and Predictive Simulations Laboratory (CHAMPS), focusing on coastal hydroscience challenges, including development of an advanced astronomic tidal model to study rising sea levels.

In 2015, Hagen accepted a faculty position at Louisiana State University (LSU), where he was named the John P. Laborde Endowed Chair for Sea Grant Research and Technology Transfer and the director of the LSU Center for Coastal Resiliency. He also held an appointment at the LSU Center for Computation and Technology and was a Fellow of the LSU Coastal Studies Institute. With his team at LSU, Hagen developed numerous forecast tide and storm surge models. These models span the deep ocean to coastal land margins in the northern Gulf of Mexico; they also include the coastal floodplains of Mississippi, Alabama, and the Florida Panhandle. Hagen’s recent research explored transport and biogeophysical modeling, with an emphasis on the coastal dynamics of global climate change and sea level rise. Hagen also served as a technical advisor to Louisiana’s 2017 Coastal Master Plan.

Hagen was a global leader among scientists studying rising sea levels and their impacts. He received many honors during his career, including a Diplomate of Coastal Engineering (D.CE) and a Diplomate of Water Resources Engineering (D.WRE). He was named a Fellow of the American Society of Civil Engineers and served on the board of ASCE’s Coasts, Oceans, Ports, and Rivers Institute. He was also a member of the engineering honor society Tau Beta Pi.

At Iowa, Hagen was inducted into the UI College of Engineering Distinguished Engineering Alumni Academy in 2016 and delivered the “Charge to the Graduates” at Commencement.

A memorial service will be scheduled at a later date. Hagen’s family asks that donations be made to www.upstateforever.org or an environmental group of the donor’s choice.