John Ackers and Graham Thompson.- Peter was born in 1924 in Bootle, Merseyside (interestingly his future wife Margaret was born on the same day very close to where Peter was born). At school he excelled at physics and mathematics and won a place at Imperial College studying civil engineering. As this was during WW II his course was condensed into two years.

On graduation he worked for the National Physical Laboratory where he carried out research into composite steel and plastic struts. In 1946 he was transferred to Bristol Aeroplane Company, where he worked on designs of the Bristol Freighter and Brabazon aircraft. He subsequently worked in local government during which time he obtained an MSc(Eng) in Civil Engineering and became a Member of the Institution of Civil 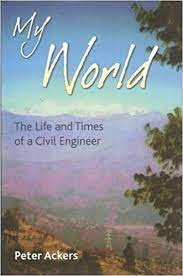 Engineers (later becoming a Fellow). He also became a member of, amongst others, ASCE and the Institution of Water Engineers (subsequentially becoming a Honorary Fellow of CIWEM).

In 1956 he joined the government’s Hydraulics Research Station at Wallingford, where he spent the next 18 years rising to the position of Assistant Director. During that time, he caried out much work on practical engineering hydraulics including work on flumes and weirs, subsequently publishing the definitive book on the subject. He went on to develop the Wallingford tables, the ultimate set of hydraulic design tables for pipework. Furthermore, he developed, with Rodney White, the Ackers-White sediment transport equation. This took a novel approach and was based on similitude theory and was calibrated against a very large database. This equation still provides one of the best representations of the transport of non-cohesive materials.

In 1974 he left HRS and joined Binnie & Partners as hydraulics consultant, where he was to remain for 12 years. He was supported by a small team of specialist engineers tackling a diverse range of hydraulic problems from across the globe. During this time, he was also appointed as visiting professor at Imperial College. He specialised in finding simple innovative solutions to complex issues. Examples are listed below: 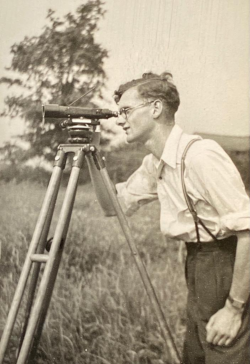 Peter delighted in resolving these types of issues. He had an incisive mind that could quickly break down a complex problem into a number of smaller manageable issues each of which could be analysed then combined to understand the overall picture. For all of his intellect he was a quiet and very humble man. As a boss he was supportive and always had time to listen and advise in a paternal way. His calm supportive leadership style encouraged us to think that abnormally complex problems were just normal problems that we could readily resolve, with the right approach. This allowed us to confidently design successfully at the very limit of technical knowledge

His passing leaves not only a gap in the engineering community but also deprives many of us of a mentor and close personal friend. His wife predeceased him by seven years and he is survived by two sons, John and David and a daughter Sheila, together with four grandsons and two great-grandchildren.