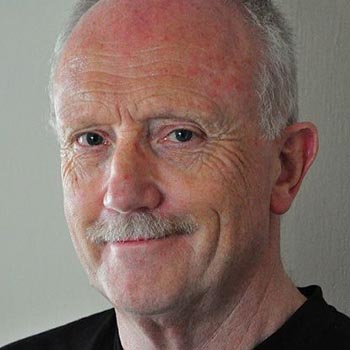 “Hydroinformatics is about the use of information and communication technologies in the field of water science and engineering. Over the past decades we’ve seen a great number of rapid developments in ever-advancing hardware and software technologies. At the same time, environmental issues have become more and more prominent in the hydro sciences, which led to the concept of the hydro-environment…”

Arthur Mynett, Prof. Emeritus at IHE Delft, shares with us his professional passions, his involvement with the association and his love for guitar playing.

You were recently awarded the IAHR Honorary Membership during the recent World Congress in Panama City. Could you comment on the considerations that led to that?

The award was granted for several reasons: (i) my involvement in the technical committees on Hydroinformatics and Ecohydraulics; (ii) my role on the IAHR Council, where I served uninterruptedly for 12 years; (iii) my contribution as vice-president for two terms; (iv) my role as chair of the local organising committee for the IAHR 2015 World Congress in The Hague, the Netherlands; (v) my active engagement in establishing and profiling the IAHR Young Professionals Network (YPN). All these  ̶  and more  ̶    are contained in the small video that we were asked to prepare.

Did you have any other professional inclinations during your childhood before deciding to become a water engineer?

Actually I had wanted to become a medical doctor for a very long time during my elementary and high school days. That was the reason I chose to go to grammar school because Latin and Greek were required in those days to study medicine. But towards the end of high school I had a preference for math and physics and so I decided to study civil engineering at Delft University.

Early in your career you had the chance to study and work in several universities (e.g. TU-Delft, MIT). Is there any professor or researcher who especially influenced your career path?

There are two who had considerable influence on me: Prof Jurjen Battjes (professor of Fluid Mechanics at TU-Delft) and Prof Arnold Verruijt (professor of Geomechanics, also at TU-Delft). When I took an interest in pursuing a PhD after finishing Delft, Prof Battjes provided me with a few options, one of which was MIT. They were the first to offer me a position. It turned out later that was because of my MSc topic in Delft on the application of finite element techniques in fluid mechanics. Until then it had primarily been used in structural mechanics. At MIT I had the privilege of working with Prof CC Mei in the field of theoretical hydrodynamics and ocean engineering. Those were exciting times and I’m still in touch with several of my classmates from MIT, who came from all over the world.

With your education at TU-Delft and your professional career between Delft Hydraulics (now Deltares) and IHE-Delft, could you briefly describe how these institutions have evolved since your career started? And what has your impact been on these developments? 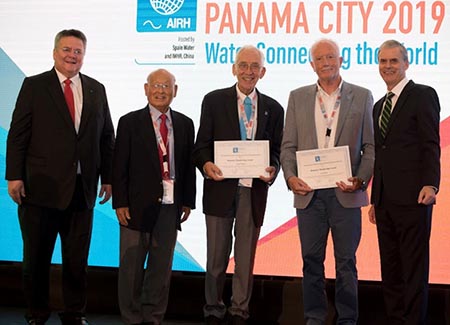 The missions of Deltares and IHE are different, but there is a common interest: research. Deltares is about research and specialized consultancy, IHE is about capacity development, education and research. Both institutes are spin-offs of Delft University (1927 and 1957 respectively), but they serve complementary roles. There have been some good examples of exchanges of students and staff members between the institutions. When I was working fulltime at Delft Hydraulics as head of strategic research & development and as a part-time professor of environmental hydroinformatics at IHE, I had the privilege of working with a large number of MSc and PhD students on research topics of common interest. I believe we developed some innovative approaches in these fields.

Both hydroinformatics and ecohydraulics are cross-cutting disciplines. Could you explain a bit what distinguishes them from classic hydraulics and/or hydro-environment?

On the one side, hydroinformatics is about the use of information and communication technologies in the field of water science and engineering. Over the past decades we’ve seen a great number of rapid developments in ever-advancing hardware and software technologies. At the same time, environmental issues have become more and more prominent in the hydro sciences, which led to the concept of the hydro-environment.

In my opinion ecohydraulics is, indeed, hydraulics: flows in natural systems like rivers, coast, estuaries, oceans are always interacting with their environment. River and coastal floods are typical examples, but hydropower development and coastal desalination plants are too. These are all applications of hydraulics that greatly affect the environment. There’s a landmark project that I’d like to highlight since it triggered the start of ecohydraulics as a discipline in the Netherlands, i.e. the Eastern Scheldt storm surge barrier, a flood protection structure that was specifically designed to minimize the impact on the local marine ecosystem.

As former organizer of the 2015 IAHR World Congress, what are the main challenges you would highlight associated with local organizing committees?

One major challenge is keeping the team together. The organization of any world congress already starts five or six years before the event with the preparation of a proposal and a bid book. Some people may be very active and full of good intentions at the initial stage, but their career may take them elsewhere as time progresses. Another aspect concerns finances. The budget of the 2015 World Congress was close to one million [euros] But the income from registration fees only arrives close to the starting date of the actual congress, which means there is no money available at the initial stages when investments need to be made and down payments are required. Without the financial support of IHE, TU-Delft, the Dutch ministries and industrial sponsors we would not have been able to get the congress off the ground. I am sure during the preparation of the 39th IAHR World Congress in Granada 2021 the local organizing committee will encounter similar challenges. I wish them plenty of success in their endeavour! 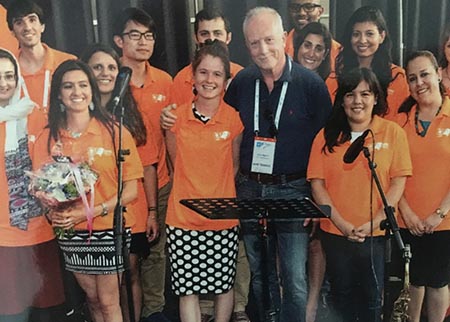 Any advice to young professionals starting their career in the field of hydro-environment?

Since hydro-environment is a relatively wide field, my advice is: whatever you do in your particular field of interest, do the best you can. But even more importantly: be sure to develop your skills of becoming a team player. Because these are likely the qualities you are going to need when advancing your career.

During the IAHR World Congress gala dinner I remember you playing guitar in a jazz band that gave a rock concert. Has your rock-star side been growing after retirement?

Happy to hear you remember the concert at the conference dinner in Madurodam at the end of the IAHR 2015 Congress … :-) My colleagues from IHE and Deltares participating in that band all enjoyed the performance. And yes, I have been increasing my activities in the field of jazz-bands and enjoy playing my Santana role in the Dutch Caribbean Groove Orchestra in Rotterdam every week, with multiple performances during the year. This year we’ll likely participate again in the North Sea Jazz event Around Town. So yes, there is life after retirement!

Our members, their views, knowledge, commitment, and experiences are what make IAHR a global leading association of hydro-environmental engineers, experts, researchers, and organisations. IAHR members’ voices and concerns guide the association on its continuing path towards a better future for water and the environment. Our members have a lot to contribute and we are listening to them so that we can put our collective voice forward.