Around 1,200 people will attend the World Water Congress hosted in Granada under the motto 'FROM SNOW TO SEA'

The mayor highlights the socioeconomic impact of the event, from June 19 to 24, in a city historically linked to the natural resource that the event is about

Granada will host, between June 19 and 24, the 39th World Congress of the International Association for Hydro-environmental Engineering and Research (IAHR), an unavoidable event with water and the environment, which also has the support of the UGR and which will bring together around 1,200 participants, representatives of the international community, experts and researchers, who will present the latest advances in hydro-environmental research and engineering.

The mayor of the city, Francisco Cuenca, has received two representatives of the organizing committee - the general secretary of the IAHR, Ramón Gutiérrez, and the professor of the UGR, Miguel Ortega - and has highlighted the "relevant socioeconomic impact" that it will have for Granada the congress, whose officials have chosen as the venue "a place historically linked to water, and in whose management, through public and private collaboration, we are a national and international reference".

Under the general slogan 'From the snow to the sea', the congress will focus on the importance of an integrated and intelligent approach to the management of the complete water cycle to address the global challenges that cities face in the face of water scarcity , climate change or artificial intelligence. The event has the support of the General Directorate for Water, the General Directorate for the Coast and the Sea, CEDEX and the Junta de Andalucía, and international organizations such as UNESCO or the World Bank. 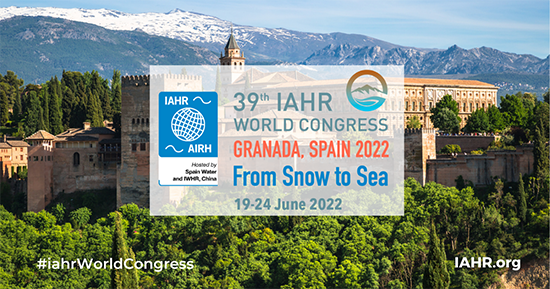 The participants, who come from more than seventy different countries, will be able to develop sessions on different topics, such as innovation, maintenance of dams and large hydraulic infrastructures, presentation of the digitalization plan organized by the General Directorate of Water, sedimentation in reservoirs, etc.

In addition, there will be a scientific program around eight cross-cutting themes that include, from the maintenance of hydraulic infrastructures or the new technological advances in water supply and treatment, to the planning of water resources in a context of global change, the role of new technologies and artificial intelligence in relation to water or the management of extreme events.

A parallel fair and exhibition will reveal the latest advances in equipment and the use of new technologies for sustainable water management, the most significant achievements in the practice of hydraulic engineering, or the most cutting-edge and innovative companies in different fields.

The presence of relevant national and international companies from the water and environment sector has been confirmed, including Emasagra from Granada and its partner, the Agbar Group.