The world’s first hydraulic laboratory is created in 1898 in Dresden, Germany, and subsequently numerous hydraulics institutes were founded in Europe and the USA. However, a wide gap between academic doctrine and engineering practice remained for the use of hydraulic models to study hydrodynamic phenomena. During this time, the science of fluid and hydromechanics progresses rapidly for many engineering applications such as hydropower, navigation, or aeronautics.

«The first 25 years of IAHR were marked by a systematic consolidation of the art and a perpetual struggle with the theoretical structuring of the many phenomena the profession has to deal with in the environment.» H.J. Schoemaker 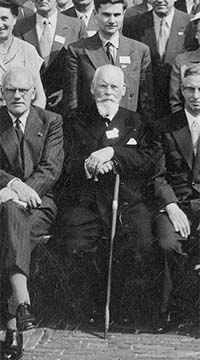 3 September 1935 | The ‘International Association for Hydraulic Structures Research’ is founded in Brussels, Belgium, by 66 visionary directors of hydraulic laboratories from Europe and the USA with the goal of advancing international cooperation in hydromechanics and its application to hydraulic engineering. Wolmar Fellenius from Stockholm, Sweden, is elected first president. German is the first official language, soon to be replaced by French with English as second language.

«Our first president was Wollmar Fellenius, an enterprising man of great capabilities, managing talents with a certain grandeur and an extraordinary tenacity. His device was ‘never give in’. I dare to say that without Fellenius no IAHR could have come into being in the conservative atmosphere around the older generation of hydraulic engineers, half a century ago. Not only the creation of the IAHR but also its survival in the ruins of the last war we owe to him.» H.J. Schoemaker

1938 | The first IAHR Congress is held in Berlin, Germany.

1939 | The second IAHR Congress, planned in Liège, Belgium, is cancelled before the outbreak of World War II, which suddenly interrupts all communication and exchanges.

1940 | The first directory of individual and corporate members is published, including 163 individual members and 36 corporate members. Creation of the Honorary Membership Award to distinguish IAHR members for their outstanding service to the association. Hubert Engels from Germany is awarded as founder of the first hydraulics laboratory in Europe.

1948 | Lorenz G. Straub from the USA is elected president of IAHR. The 2nd IAHR Congress takes place in Stockholm, Sweden. The word “structures” is removed from the name to indicate the much broader scope of IAHR. 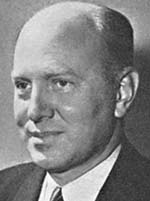 «To his friends, Straub was 'Lorenzo the magnificent'. He belonged to the group of genuine hydraulic engineers who saw research as an effective means to an end and by no means as a mere artistic satisfaction of scientific curiosity.» H.J. Schoemaker

1951 | 4th IAHR Congress held in Bombay, India. IAHR is one of the founding members of the ‘International Union of Technical Associations’, which represents the international engineering and technology community.

1955 | Pierre Danel from France is elected president of IAHR. 6th IAHR Congress held in The Hague, the Netherlands. 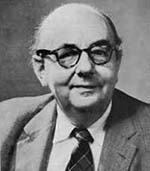 «The third President of IAHR in this period was Pierre Danel, a member since 1937, elected vice-president in 1951 and president in 1955. After 1959 he was co-opted as a member of the Council until the end of his life in 1966. As long as his health permitted it, he was present at all Council meetings and congresses. He knew all the institutions dealing with hydrodynamics on both sides of the Atlantic thoroughly through personal visits and a good acquaintance with the leading personalities, being well versed in all theoretical and experimental aspects of hydrodynamics. By this genial and artistic creativity, he led the IAHR brilliantly far beyond the traditional limits of its origin.» H.J. Schoemaker

6th IAHR Congress in The Hague, the Netherlands.

1957 | 7th IAHR Congress held in Lisbon, Portugal. Specialised sections, later grouped into three divisions, are introduced at IAHR in order to give ample space to the various explosively developing branches in hydrodynamics. The first special session is on Hydraulic Machinery.

1960 | Arthur Thomas Ippen from the UK is elected president of IAHR. First Symposium on Hydraulic Machinery held in Nice, France. 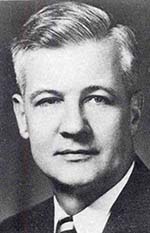 «Arthur Thomas Ippen was both in scientific research and in social actions a man of careful perseverance and solidity. […] To prevent useful information getting lost, he created new space for discussion and publications on research.» H.J. Schoemaker

«Ippen's name also will always be associated with the IAHR regional committee activities, the Regional Divisions as they are now called. Arthur proposed and encouraged these activities which were initiated by the formation of the Regional Committee for Latin America and the scheduling of its first biennial regional congress in Porto Alegre, Brazil, in 1964.» James W. Daily