The riparian landscapes in many river reaches have been changing from white sand/gravel bars to greenery lands covered with grass, bush and mature trees. This change can alter the riparian ecosystem and the river's engineering functions relative to the flood management and sediment regimes. Although the succession from recruitment to mature vegetation is considered a part of natural phenomena, the rate of change has been affected by anthropogenic activities that have altered the flow and sediment regimes and water quality traits of the river system. Another possible driver of vegetation expansion could be a change in rainfall and temperature patterns associated with climate change, which both affect the survival and growth of riparian plants. 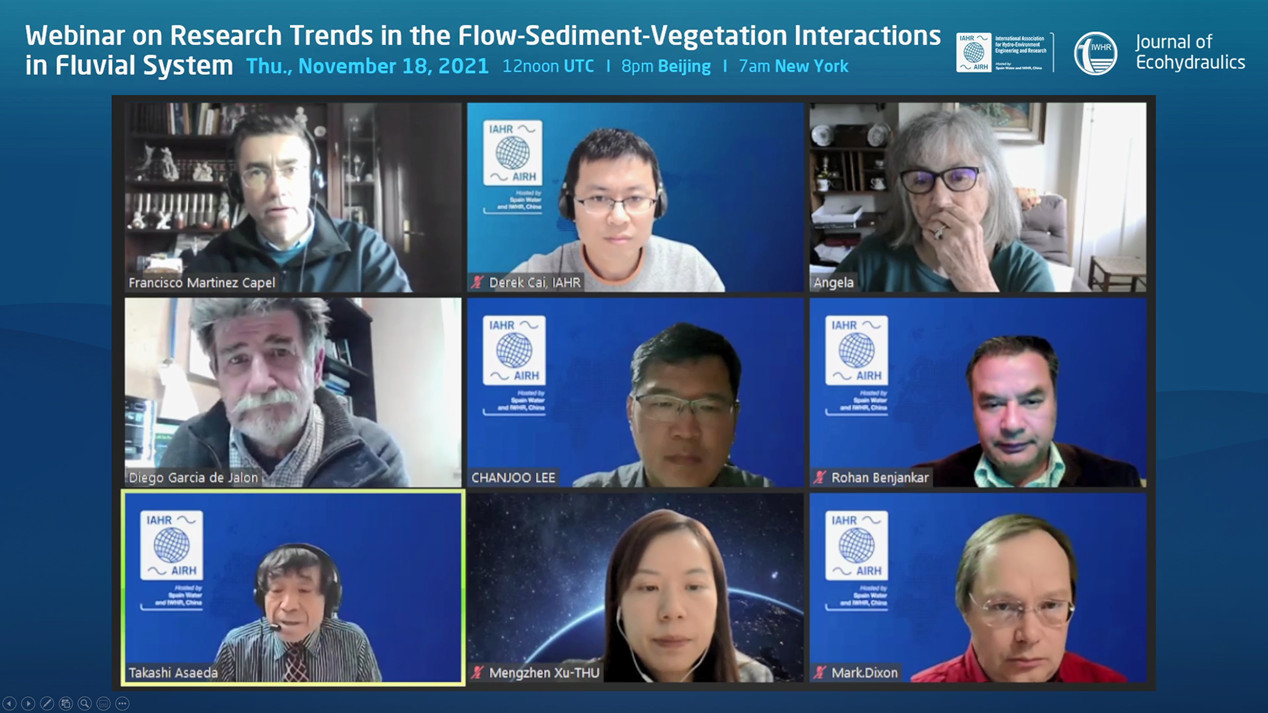 To better understand the flow-sediment-vegetation interactions in fluvial system and to capture the research trends, a webinar led and chaired by Takashi Asaeda, chief editor of the Journal of Ecohydraulics, was organized by IAHR on November 18, 2021, focusing on the conceptualization of the causes and effects of such change, field investigations on the “greening” of the riparian landscape, and the characteristics, degrees of such change, and impacts (positive and negative) on the riparian ecosystem, including flood management and sediment regimes. 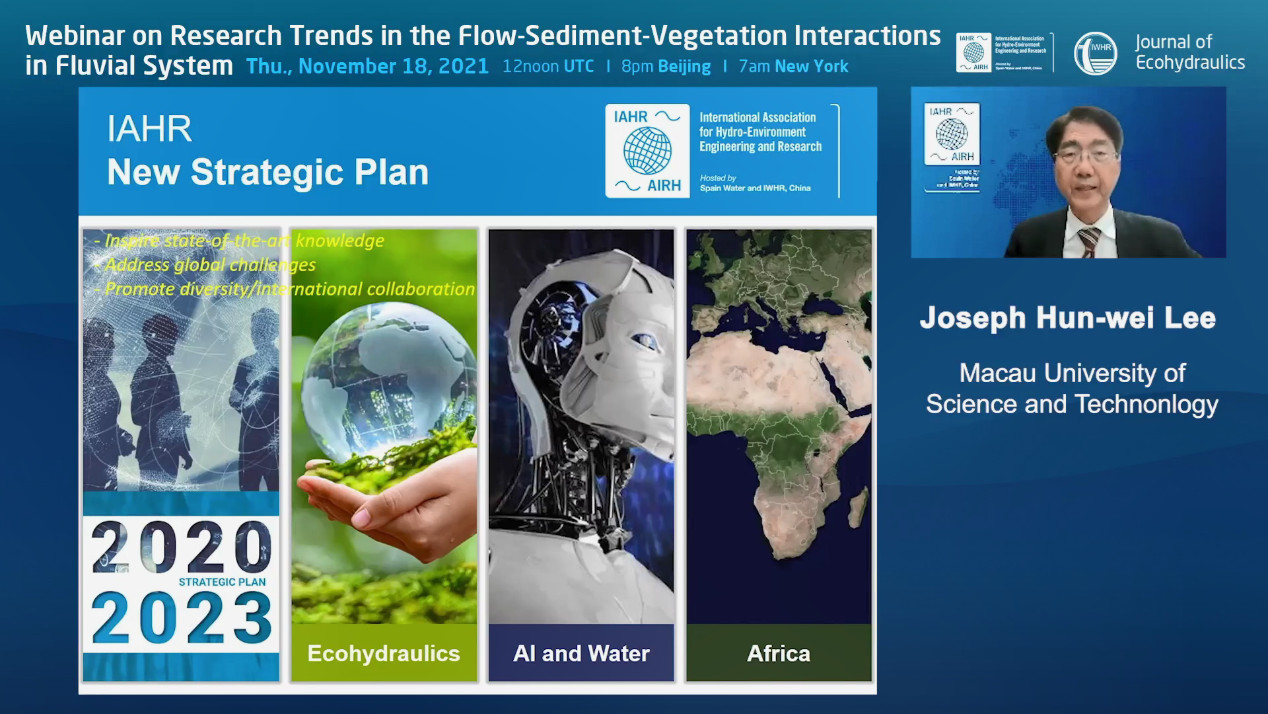 Before an introduction of the Journal of Ecohydraulics was made and six technical reports were presented, an opening address was given by IAHR President Joseph Hun-Wei Lee, who pointed out that “Ecohydraulics is a strategic theme of development in IAHR, as we believed it touches on many important interdisciplinary issues at the interface between fluid mechanics and modeling of nutrient recycle and ecology, ranging from harmful algal blooms to fishery to habitat modeling to flow-sediment-vegetation interactions. It is also related to the study of nature-based solutions to combat climate change-induced impacts.”

Angela Gurnell from Queen Mary University of London, UK gave a talk on “Changing Rivers: Interactions among River Flows, Sediment and Vegetation.” She started her talk with the big picture of geomorphological styles of rivers and floodplains, and the interactions among flow regime, sediment and vegetation, which are influenced by climate factors and human interventions and pressures. She first focused on the plant/vegetation-patch scale and pointed out that “pioneer riparian and aquatic plants can both affect river morphodynamics across rivers of different flow and sediment characteristics and geomorphic style” by taking as an example the Tagliamento River in Italy and black poplar, the dominant pioneer tree species in the bordering riparian woodland. Then she zoomed out to the reach scale and, with maps and statistics, explained that pioneer landforms developed around colonizing vegetation can grow and coalesce rapidly during periods of limited flood disturbance. Growth and coalescence leads to larger-scale island or floodplain growth, Through time sequences of flow disturbances and intervening windows of opportunity for plant survival and establishment, lead to both landform development and erosion, and also to distinct topographic and hydraulic signatures associated with vegetation encroachment or removal. She finished her talk by presenting a conceptual framework on how different types of plant engineer different styles of river environment and can drive transformations in river styles by constructing different pioneer landform assemblages that underpin larger scale morphological changes. 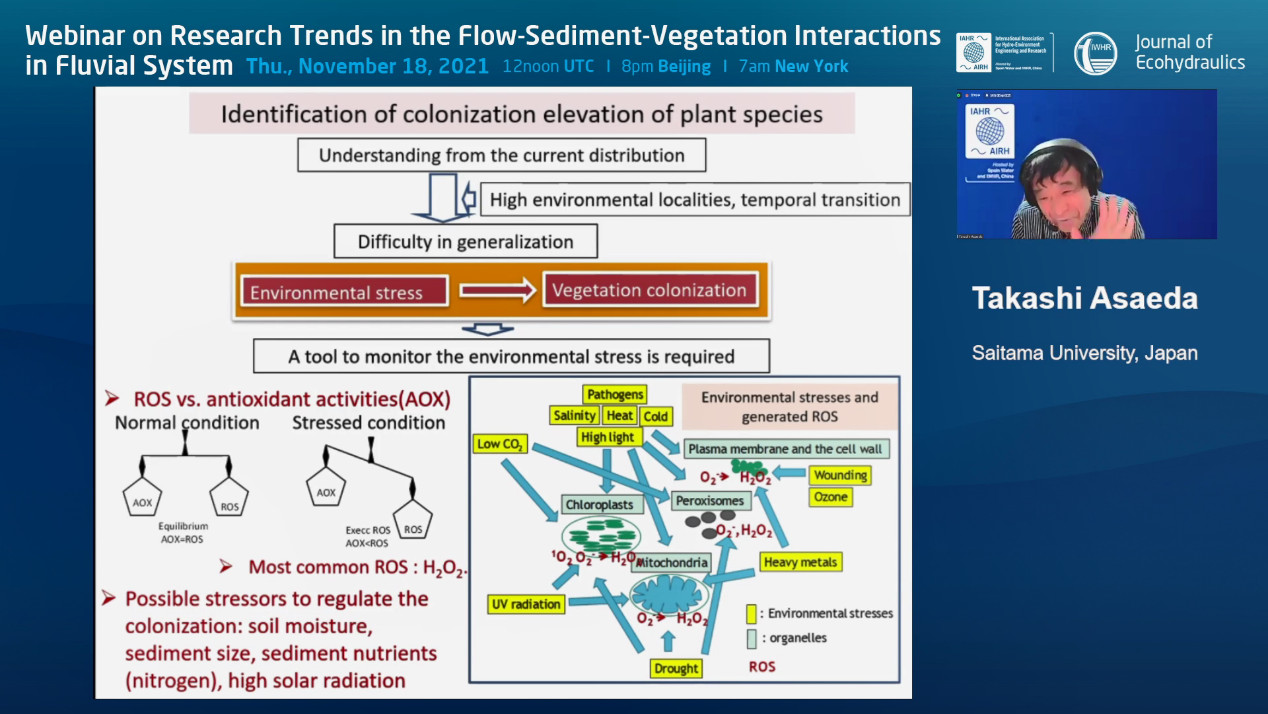 Chanjoo Lee from Korea Institute of Civil Engineering and Building Technology, Korea gave a talk on “Change from White to Green River: Long- and Short-term Perspective in Naeseong Stream, Korea.” With Naeseong Stream as an example, he made a comparative study between the river being “white” – bare riverbed with sand/gravel bars, and the same river being “green” – colonized riverbed by herbaceous/woody vegetation, and analyzed why and how the appearance of the river, as well as the dominant processes, has gradually changed since the 1980s. The changes were also visited on a short-term perspective about the flow-vegetation interaction, vegetation development from herbaceous to woody plants, morphological evolution of floodplain formation, and changes in cross-section shapes.

Diego Garcia de Jalon from Universidad Politecnica de Madrid, Spain gave a talk on “Riparian Vegetation Structure in Rivers that Lost Their Dynamism.” After a review of the changed sceneries of the anthropized rivers (as well as the pressures, causes and consequences) and the riparian response to immobilized rivers, he conducted a riparian vegetation analysis using a case study on Guadarrama River, which runs across the Madrid city hinterland. Before concluding, he opened discussions on the overall recognition of river dynamism decrease (in the Mediterranean region), the multiple disturbances with synergistic effects, and the uncertainty in predicting river trends and implementing sustainable management of riparian forest. 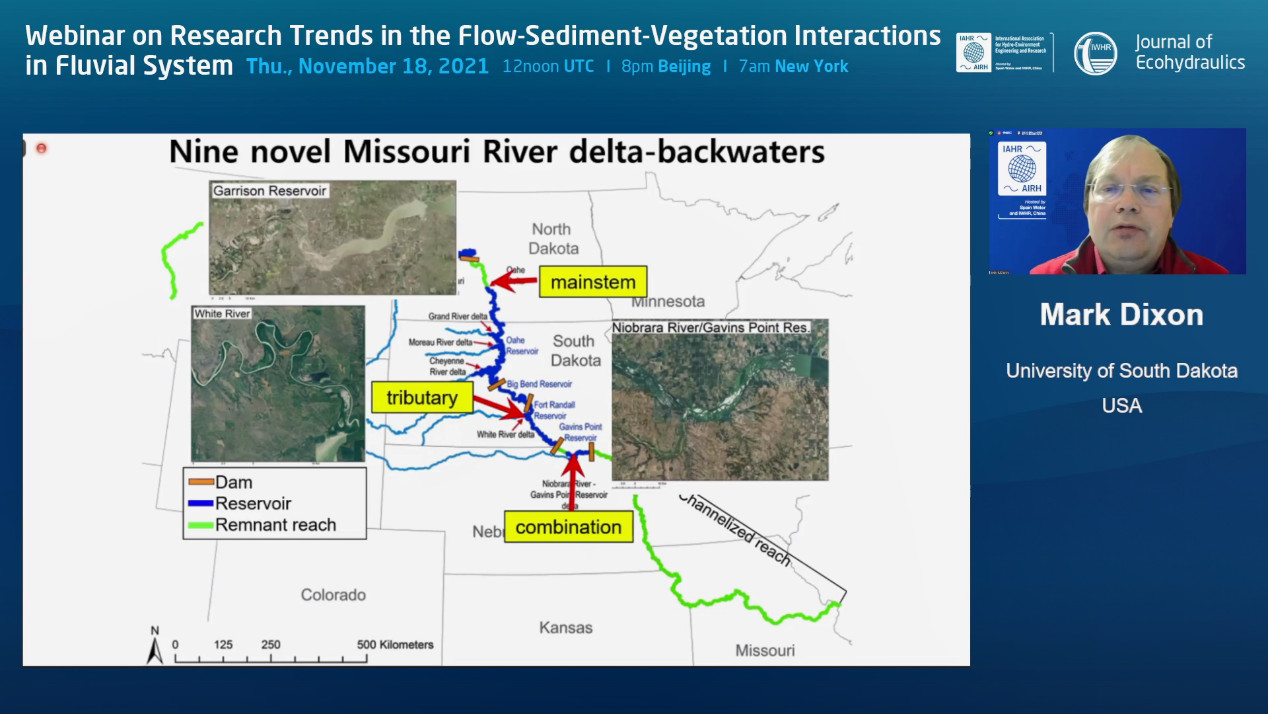 Mark Dixon from the University of South Dakota, Vermillion, USA gave a talk on “Colonization of Reservoir Delta-Backwater Areas by Woody Vegetation: Case Studies from the Missouri River, USA.” Using examples from the White River delta-backwater and the Lewis & Clark Lake - Niobrara River delta-backwater, he analyzed spatial-temporal patterns of post-dam fluvial geomorphic changes and woody vegetation expansion. He concluded that 1) reservoir delta-backwaters may support significant recruitment of riparian woody vegetation, particularly of early successional species (Populus and Salix) that have declined elsewhere on the regulated river system; 2) spatial-temporal dynamics of woody vegetation may differ substantially across delta-backwaters on different reservoirs; and 3) ecological characteristics of delta-backwaters on other reservoirs worldwide are insufficiently understood and hence are in need of additional study. 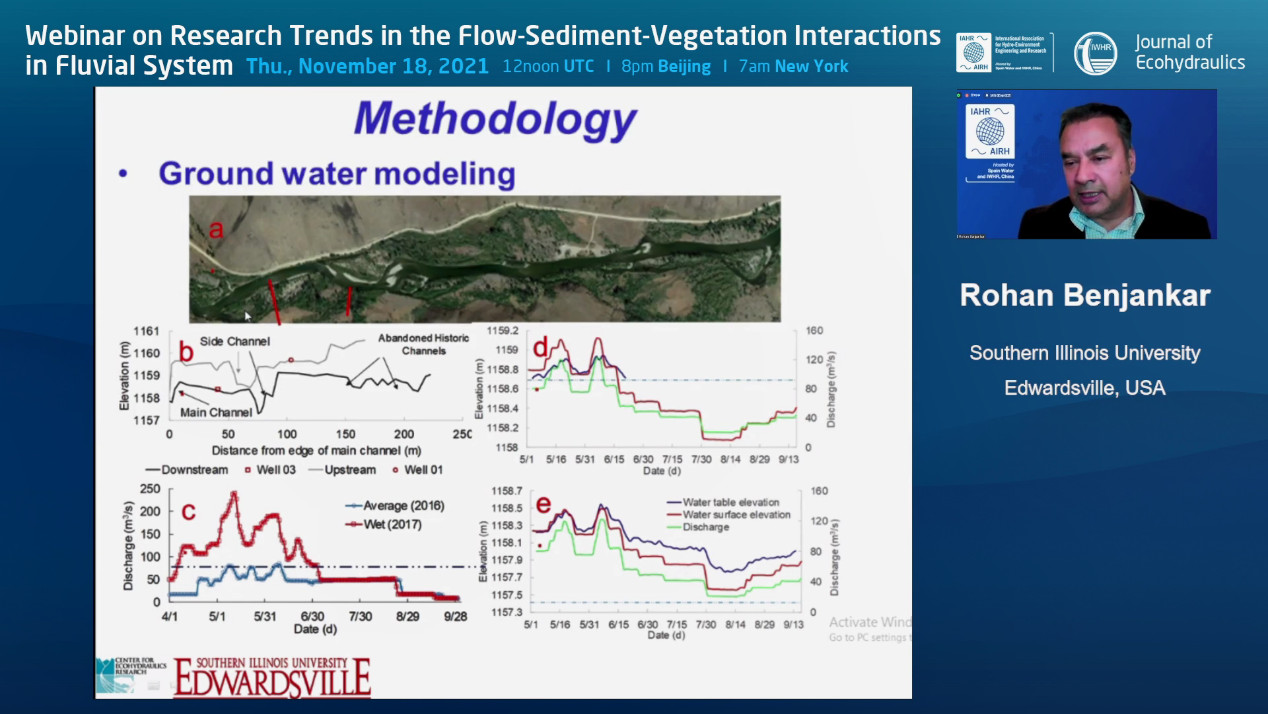 Rohan Benjankar from Southern Illinois University Edwardsville, USA gave a talk on “Riparian Vegetation Recruitment Status at Dam Altered System and an Approach for Restoration.” After a review of the importance and current status of riparian vegetation, he started introducing a case study, in which he and his colleagues used 2D hydrodynamic model (combined with field work) on the South Fork Boise River upstream from the Anderson Ranch to analyze the effects of flow on riparian vegetation seedling recruitment and application of riparian vegetation model to select area for planation as an approach for restoration. He concluded that 1) Wet year (high flood) increases shear stress and enhanced sediment transport and morphdynamics resulting favorable for riparian seedling recruitment, 2) Shears stress is limiting factor for natural seeding recruitment, 3) Vegetation model is a tool for predicting natural recruitment and to select areas for plantation, and 4) Plantation is an alternative for riparian vegetation restoration (Specifically for dam altered system).

The ensuing panel discussion was joined by Francisco Martinez Capel, former chair of IAHR’s Technical Committee on Ecohydraulics, and devoted to questions on the critical (beneficial) concentration level of H2O2 in both soil and plant tissue, methods to quantify the percentage of vegetation coverage in a river cross-section and the percentage of aquatic vegetation into flow resistance of the river, the water quality parameters (TDS, TSS, etc) in terms of sediment-plant-water interactions in riparian zone, the effects of climatic seasonality on the colonization of vegetation, the nutrient level and microorganism biodiversity in white and green rivers, and the alternative (conceptual) model insisting that a disturbance (chance factor) frequently resets or modifies the fluvial biogeomorphic succession clock (or flow-sediment-vegetation couplings).